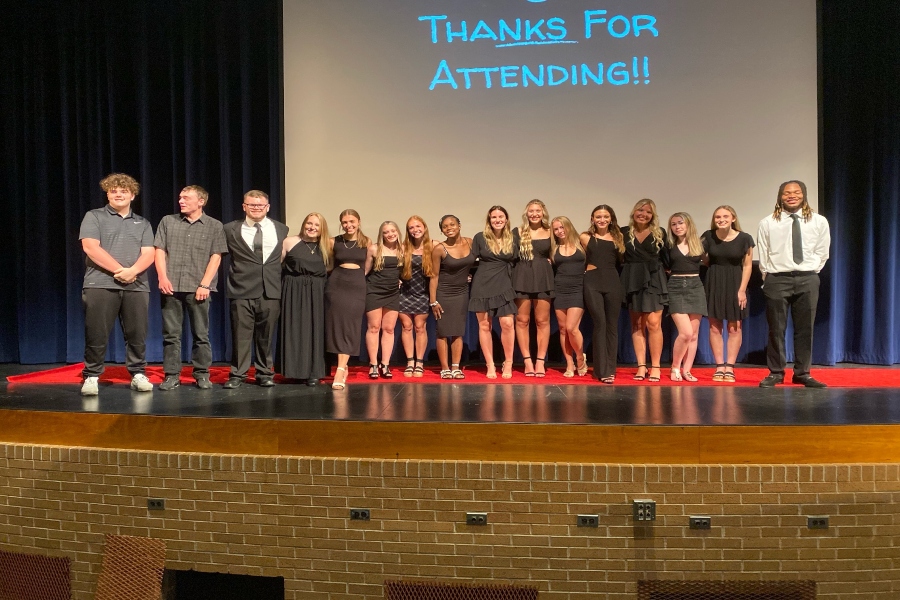 The wonderful yearbook staff standing on the red carpet.

The 2022 Senior Choice Awards was a success.

The Class of 2022 came together May.31 for Kearsley’s version of the popular award show, the Grammy’s.

The yearbook staff here at Kearsley put together a fantastic show; they were able to showcase many students’ individuality.

I spoke to a yearbook staff member about the night to get more insight into their thoughts on it all.

“It took some time to come up with some fun ideas to make the show entertaining. We had multiple practices to try to perfect everything and it also took some time to put together all of the slide shows and the music and all if the behind the scenes stuff.”

Brulla also mentioned what the best part for her was.

“But my favorite part was definitely seeing how all the hard work came together and watching everybody’s reaction when they won their award.”

The yearbook staff might have put the show on, but they weren’t the only part of the show.

Nominee Lukas Bennett spoke about how he felt being nominated.

“I felt really honored that my class thought of me, considering this year is our last, it felt really good.”

I also spoke to some of the winners of the award show.

Taking the award for “Teacher’s Pet,” Jordan Durden spoke with me about how he felt about winning his award.

“I felt pretty good about winning the award. I knew that was going to happen, but it was fun doing it and I liked how all of the seniors were having fun.”

“Honestly I was kinda laughing. I wasn’t surprised that a lot of people voted for me.”

With only a short amount of time left for our seniors before they go on to bigger and better things, we got to not only celebrate them individually, but as a whole class.

Regardless of who won and who didn’t. they applauded each other and supported one another. I’d say that was the most admirable thing about the whole show.