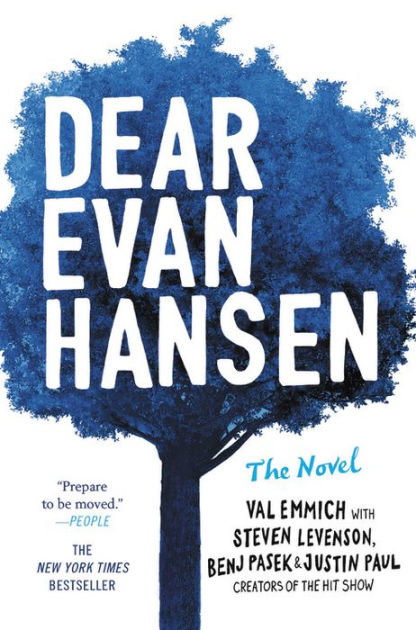 "Dear Evan Hansen" a novel based on a Broadway show of the same name.

“Dear Evan Hansen” by Val Emmich, Steven Levenson, Benji Pasek, and Justin Paul is a young adult novel that tackles the same themes as the musical of the same name.

The novel deals with suicide, social anxiety, and how a small lie can cause disastrous and life-altering consequences.

Evan Hansen is a socially anxious teenager who has no real connections with those around him, not even his mother who spends most of her time at work.

To help him with his anxiety he not only takes medication but also has to see a therapist, the therapist tasks him with writing letters to himself.

When one of these letters is found on Connor Murphy after his suicide, it turns into a complex lie.

Connor was the school outcast, who also had trouble with his mental health, so when Evan’s letter appears to imply that they were friends Connor’s parents come looking to Evan for answers.

Evan doesn’t know what to do and his social anxiety causes him to panic, claiming that they were super close and this leads to him being trapped in an accumulating lie.

As he gets closer to the family, mainly Zoe Murphy, Connor’s sister, his keeps growing and the consequences of the lie only grow along with it.

“Dear Evan Hansen” tells a great story about dealing with mental health, which is something that is incredibly important today, certainly amid the pandemic and rising mental health issues among adolescents.

The story handles such a sensitive topic with a seriousness that it deserves, while also not forgetting to have moments of relief for the reader.

This is one of the greatest strengths of the novel as it is able to make such a premise as this work, while still having comedic moments.

The novel does not paint any party as in the wrong here and makes the reader decide for themselves. Evan is a flawed character, but so is each member of the seemingly happy Murphy family.

Since the story fits closely to the original musical, that means that the authors were able to reference the songs, which can be fun for fans.

Though some of the songs do feel a bit forced into the story, such as Only Us (Performed by Laura Dreyfuss, Ben Platt), and do not flow smoothly into the narrative.

Regardless of its flaws, the author translated the Broadway musician beautifully with this novel.

The author even added a few pieces to the story in order to make it a different but similar experience for those that have already seen the musical.

“Dear Evan Hansen” is truly a five star novel, even for those not familiar with its source material. It not only has emotional beats, but also contains comedic moments that lighten up the darker ones.