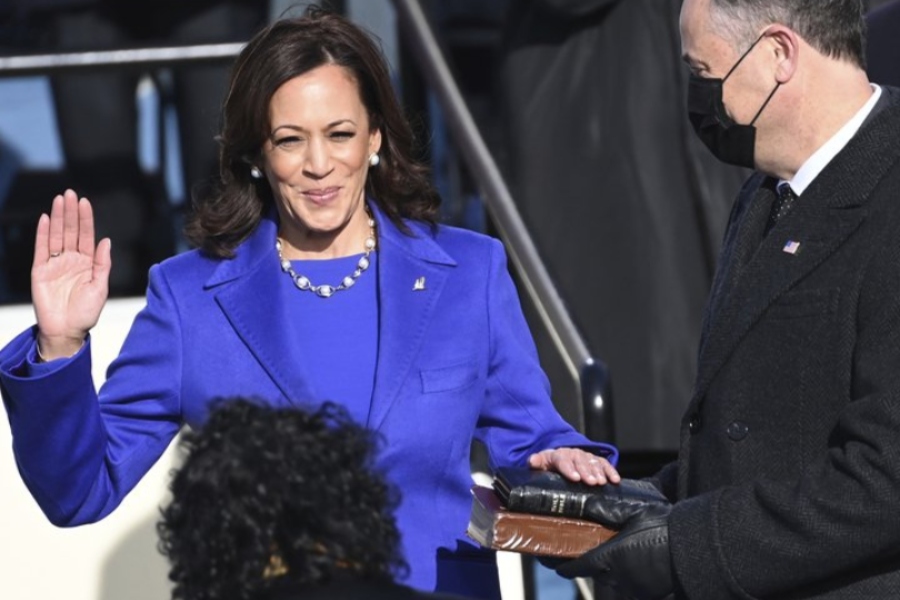 Vice President Kamala Harris is sworn in Jan. 20 in front of the Capital Building.

Today we know Kamala Harris as the first female Vice President, but she’s been making a name for herself and other women since she could walk.

Her parents, Donald and Shyamala Gopalan Harris, were not only first generation immigrants to the United States, but also vocal social activists. Through them, Harris was introduced to the civil rights movement and big name role models like Supreme Court Justice Thurgood Marshall and civil rights leader Constance Baker Motley.

Harris was born and raised in California, which is also where she worked through her college education. She graduated from Howard University and the University of California, Hastings College of Law.

Her first elected position was in 2003 when Harris took the role of District Attorney of San Francisco. In this capacity, Harris created a program to provide first-time drug offenders with rehabilitation and access to a complete high school education.

Seven years later, in 2010, Vice President Harris was elected California’s Attorney General. Making a point of creating greater transparency in the criminal justice system, she established the state’s first Bureau of Children’s Justice, and was involved in several other criminal reform bills.

2017 marked her first federal-level position as a California state Senator. Harris served on several committees, including the Senate Homeland Security and Governmental Affairs Committee, and the Senate Select Committee on Intelligence, which allowed her to advocate for the rights of DREAMers and secure American elections.

Outside of these committees, Harris prioritized the improvement of maternal health care, passed a bipartisan anti-lynching bill in 2018, and her legislation to protect Historically Black Colleges and Universities was passed into law.

Harris has authored two books, Smart on Crime (2009), which detailed her ideas for modern criminal justice reform, and The Truths We Hold (2019), which is a memoir detailing issues that faced Harris through her career. She also released a children’s book, called Superheros are Everywhere in 2019, teaching children to value the people in their lives.

Today, Vice President Harris is not only the first woman to hold her office, but the first Black American, and first South Asian American. Throughout her career, from District Attorney of San Francisco to Vice President of the United States, Harris has fought and continues to fight for the rights of women and minorities, setting a precedent for the positions she was first in, determined not to be the last.

“I’m not overly surprised or awestruck by the fact that we have a female of Asian decent,” Nester said. “From when I started teaching in 1992, our government has become more and more diverse, and the landscape has become more diverse. So it would only make sense that you would see people of color and women in a democratic government.”