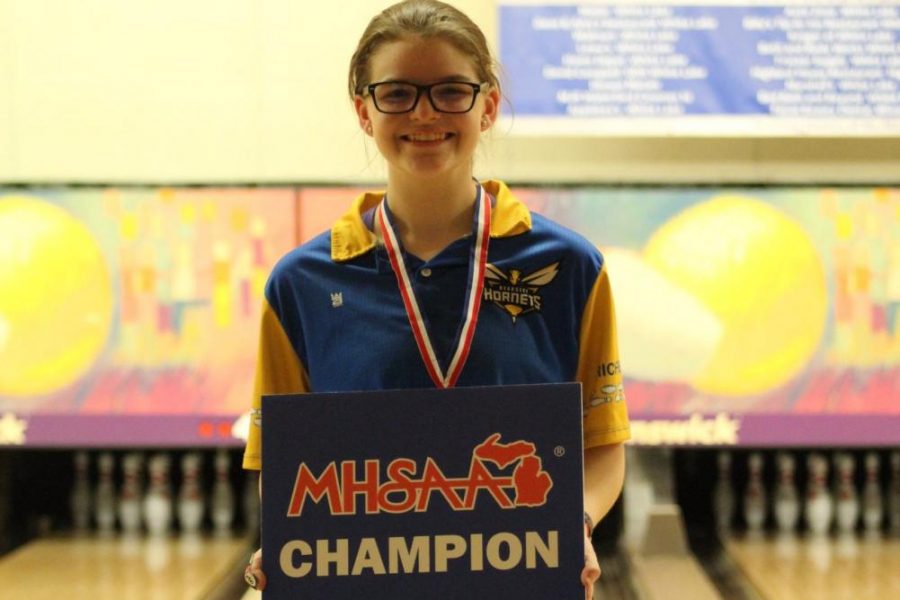 After qualifying first in regional championship, Timm looked good for the state finals.

When it came to the state championship, neither boys made it into match play, but Eible and Timm scraped through, qualifying twelfth and fifteenth.

Eible fell off earlier, but Timm clung on, pushing herself to win the state championship with the help of her coach, Mr. Rob Ploof.

“My Coach (Rob) just kept telling me to make my spares and that would give me a better chance at winning,” Timm said.

In her first round, she knocked off the defending state champion, moving into the final eight.

Soon enough, she was bowling for the state title, winning by a mere 21 pins.

Timm was surprised and overwhelmed with emotions.

“I was a mix of emotions,” Timm said. “I was excited for myself but sad that my team didn’t get the title the day before.”

Timm made the community proud, achieving what she wasn’t expecting.

She hopes she made her coach proud this season, as he is retiring this year.

“With Rob retiring this year, there was a lot of pressure to get the title,” Timm said.”I am very glad that I got the opportunity to earn his last state title. He has been an amazing coach and role model for me for the past few years.”