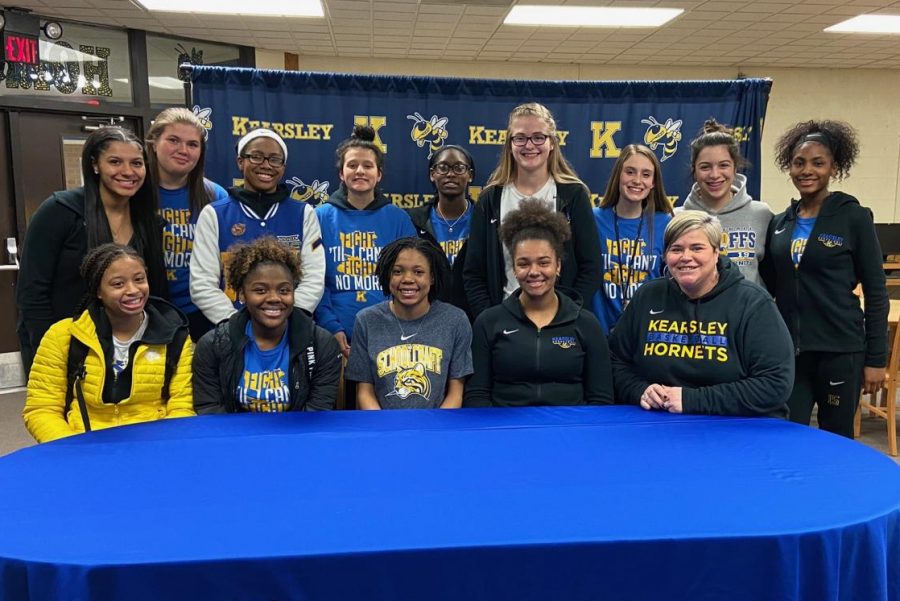 Senior MarKayla Shannon (front row, center) signed her National Letter of Intent to play basketball at Schoolcraft College Monday, March 3. Her coaches and friends supported her at the signing.

Senior MarKayla Shannon is moving up in the ranks of basketball after three seasons with Kearsley’s squad.

She signed her National Letter of Intent to play at Schoolcraft College Monday, March 2.

Shannon plans to major in pediatric nursing at Schoolcraft.

She chose Schoolcraft to set her up to play at an even higher level later on.

“It was a good opportunity for me to play basketball for two years before moving up to a higher level,” Shannon said.

She will miss the support from her high school team the most.

“I’m going to miss Sydney (Walker) and JaKeira (Wash) because of how much fun they made the game,” Shannon said. “JaKeira and I are now rivals and have to play each other two times a year but we are still friends. That’s going to be the hardest part, going from goofing around to ‘I have to beat you’ now.”

Shannon didn’t have high expectations to play basketball at the college level.

“I didn’t expect to play college basketball because of not starting junior year and at the beginning of senior year,” Shannon said.

Teammate Ciara Scott, senior, believed Shannon could go to the next level.

“I am very proud of her because I have always known she had it in her to move on to the next level,” Scott said. “She is very talented.”

Shannon is ready for the change from high school to college

“I’m looking forward to meeting new people and getting to know my team better,” Shannon said.