‘Frozen II’ ices out the original 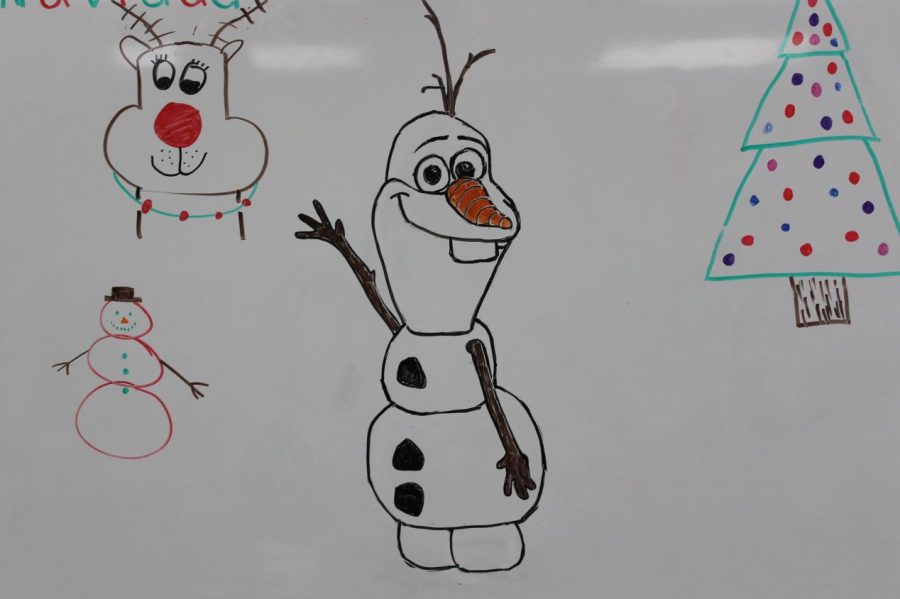 Junior Jacqueline Olivo drew this picture of Olaf the snowman, a character featured prominently in the "Frozen" franchise.

This review features spoilers for the movie “Frozen II.”

“Frozen II” debuted in theaters Friday, Nov. 22, with an improved plot from the original “Frozen.”

The first installment glided to the top of the box office in 2013 while raking in a cool $1.3 billion profit. “Frozen II” already earned $739 million since its release.

Agnarr begins to tell a story describing the forest’s creatures and the Northuldra, an indigenous tribe that lives in peace with nature. The Northuldra control the forest.

The people of Arendelle and of the Magical Forest were allies, led by Agnarr’s father King Runeard and the Northuldran leader.

When visiting one day, Agnarr relaxed in a field when suddenly he heard a commotion. A fight broke out between the groups, which made the forest angry.

Burning trees and sending aggressive creatures after the people, the forest grew tired of the fighting and wanted everyone to leave.

An unknown figure saves Agnarr from the wrath of the forest by carrying him to safety.

After the fight, a mist covered the forest that allowed no one to enter or leave.

Traveling back to the story’s main setting, the film settles in on Elsa, who is called by a voice. Her curiosity causes her to search for its source.

When the voice asks her what’s wrong, she denies anything is unusual and finds her way toward the voice.

The voice bothers Elsa endlessly, annoying her so much that she forces everyone out of Arendelle.

This evacuation caused the voice to use their ability, to control the four elements.

The voice proceeds to burn down houses, stop waterfalls and fountains, freeze the air, and shake the ground.

This panic leads the trolls who reside in the Valley of the Living Rock to explain the situation.

Pabbie, a troll mind reader, explains to Elsa that the future of Arendelle is in danger because of the mystical forest. It wants revenge on Arendelle for the pain it suffered.

Elsa, Anna, Kristoff, Sven, and Olaf set out on a journey to figure out how to stop this from happening and return the forest to peace.

The journey leads to many conflicts between Anna and Elsa, and Elsa goes off on her own to find the voice.

When she discovers an island covered in ice, Elsa understands her true self and realizes she doesn’t belong in Arendelle like her sister Anna does.

Elsa undergoes a transformation and finds out that the voice, which was her mother, revealed her destiny to become the fifth element, which lifts the curse on all the forest.

The further she goes into the island, the more she learns the truth about Arendelle and the Magical Forest.

Knowing this information leads to Elsa’s demise, leaving her frozen on an ice island far from her friends and the forest.

Anna saves her sister by destroying a dam that King Runeard built, lifting the curse.

As the journey ends, Elsa crowns Anna the new queen of Arendelle and realizes her destiny, moving to the ice island.

“Frozen II” was an average children’s movie. It improved upon the story of the original movie.

In the beginning, “Frozen II” was hard to watch because it tried to put everything together from the two movies.

However, the movie ended greatly with both of the main characters and it gave the spotlight to some minor characters who didn’t get the chance they deserved in “Frozen.”