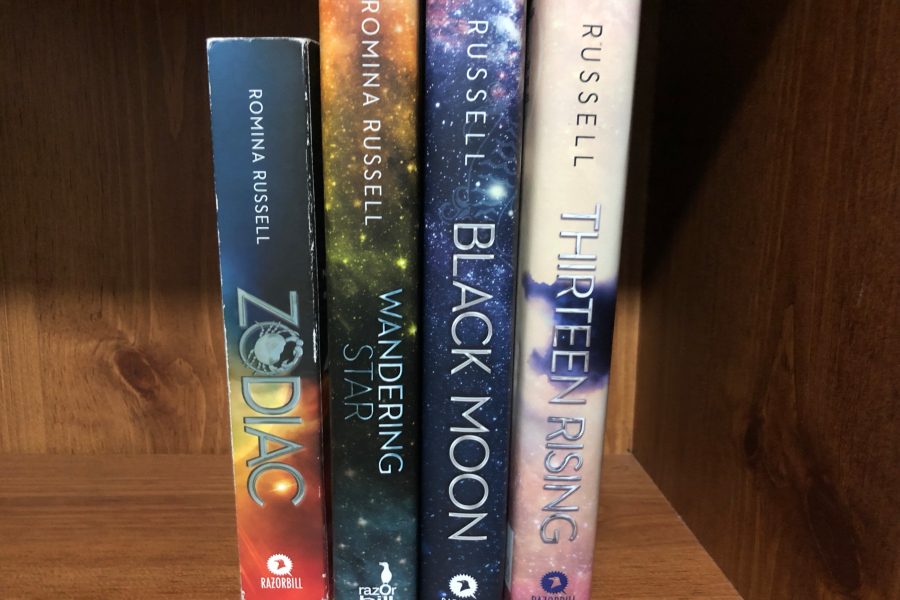 The Zodiac series in order, left to right, will appeal to fantasy and sci-fi readers.

A world where 12 zodiac signs were once in harmony are struck with a tragedy. One girl who brings light to the galaxy, Rhoma Grace, will stand against the norm to protect her friends and her people.

The “Zodiac” series, written by Romina Russell, starts its journey by following Rhoma, a 16-year-old girl, who has an unusual gift for reading the stars.

Learning this from her mother, she is destined to be in the royal guard for the Zodiac planet, Cancer.

This ability causes Rhoma to see a great devastation during her sight reading one evening: Cancer getting destroyed by a collision between Thebe and Elara, Cancer’s two moons.

She is forced to flee with her friends to where the Guardian resides.

As they arrive, Origene’s advisers tell Rhoma she has a gift only a Guardian can possess. The advisers were told she was the next guardian by reading the stars.

Rhoma is left with a hard decision, to either become a young Holy Mother and help her planet through its dark age or leave with Nishi to Hydragyr, Gemini’s biggest planet.

But her nurturing nature gets the best of her, leaving her to accept her role and help her planet.

She is separated from her brother, Stanton, her father and friends Nishi, Deke, and Kai to govern Cancer through its tragedy, while other Cancerians are forced to flee to Hydragyr.

Days after Rhoma’s ceremony, unexplained weather catastrophes continue, leaving Rhoma to look into the mystery. She does this by going into the Psy, an energy-based world, to allow communication for guardians and house officials.

She discovers an evil force, Ophiuchus, the exiled 13th Guardian of The Zodiac legend that was written in children’s stories.

She believes he has returned for revenge against the leaders of the Zodiac for banishing him into the darkness.

Her passion and determination to save the galaxy makes her leave home to discover the history of the Zodiac and defeat Ophiuchus before he destroys the whole universe.

With the help of her friend Matthias, her adviser and guide who is a part of her Royal Guard, and Hysan Dax, a young envoy from House Libra, she must travel through the different houses to warn the other Guardians about Ophiuchus before it is too late.

This series has a total of four books: “The Zodiac,” “Wandering Star,” “Black Moon” and “Thirteen Rising.”

People who enjoy astrology, the zodiac signs, or love fantasy and sci-fi will enjoy this series.

The series has won the hearts of many teens and young adults, becoming a bestseller.

Mrs. Marti VanOverbeke, English teacher, was engrossed by the book’s summary during the interview.

VanOverbeke enjoyed reading the prologue of the series.

“The book sounds very interesting,” VanOverbeke said. “I like how the writing of the story is written, the structure.”

VanOverbeke’s eye was caught by the writing and descriptions of the characters.

“The storyline was very unique, the characters too,” VanOverbeke said. “This is why I love to branch out to different genres.”